Has anyone ever read the Bromeliad?
Well, a lot of my inspiration for twisting the Halfling class came from this... and from Goblin Punch... and from Ten Foot Polemic... let's just say I don't actually have any original ideas at all.

Halflings are seen to be relaxed people who live in harmony with nature. They wear no shoes, only basic homespun garments, and use no tools. They live inside the hollows of large trees (or sometimes in large warrens in the ground), generally have many completely docile animals around, and as a rule are high off their fucking asses all the time.

Halflings have the best shit, everyone knows this. It is said that it was the Halflings who taught the secret of making alcohol to humans, and although humans have subsequently developed a large range of alcoholic beverages, it is universally agreed that there is no drink more potent or toothsome than that made by the Halflings. They produce wines, meads, beers, and spirits of every kind imaginable.

In addition to this there is the famous Halfling weed, which produces a feeling of relaxation and euphoria, with the side effect of increased appetite (the source of the Halfling reputation for idleness and appetite). Halflings are particularly fond of this, which seems to settle their almost omnipresent anxiety. There are many varieties and strains of this plant, and connoisseurs are known to discern between them as a vintner would between vintages of wine.

Cultivate large varieties of Psilocybin mushrooms, which they are fond of eating ("A shortcut to mushrooms" is a common Halfling expression meaning that some activity or other will be a good time). In addition to preparing them in many different ways, they will also make "toadstool tea", a distillation of the active qualities into a, rather repellent, juice (aficionados swear it is an acquired taste). Halfling brewmasters are fond of brewing these into beers and wines, combining the psychoactive properties of the mushrooms with the effects of alcohol.

Halflings will cultivate poppies where available, creating tinctures, teas, and smoking products. All of which has a euphoric and soporific effect. These products are often employed by surgeons of the human world to numb patients during surgery, or to placate those madmen hounded by mania. Halflings are also fond of certain varieties of toads and frogs whose skin, so they claim, contains a wondrous effect. They will often keep the same animal by their side for may years, and upon its death they will skin it, dry the skin, and smoke it.

A variety of other plants and procedures unknown outside of Halfling communities also exist. Pretty much if it will get you out of your mind, the Halflings have probably already mastered the cultivation of it. Halflings have a resilience to all forms of psychoactive drugs, probably for an overabundance of them. 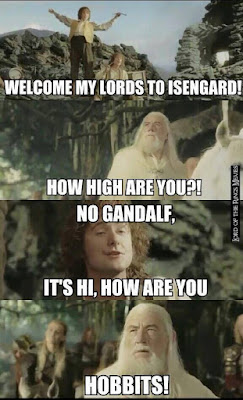 
Halflings have a preternatural ability with animals, being able to summon them to help willingly with a manner of tasks. Halflings have an inbuilt natural magic that lets them extend their minds into other beings, and dominate their will. Although Halflings would obviously prefer to put it in a more gentle nature, but that is the nature of it. Their trees are hollowed out by armies of squirrels, their burrows dug by legions of badgers, their flocks need no fences as the animals simply do not stray, and when the time comes they walk meekly to the slaughter.

A Halfling settlement is unnervingly peaceful to outsiders. Simply the sounds of nature, of small figures relaxing in their tree hollows or by the brook, or composing their god-awful poetry. All sound of industry replaced with quiet and docile animal sounds. The cows do not even moo too loudly. It is not exactly unpleasant, but it is uncomfortably alien. Most Halflings who leave their settlements, make a good living working with animals, although some left their settlements because they did not wish to work in the traditional Halfling manner.

The Dread of Machines

Halflings are the other side of the coin to Dwarves. Halflings are terrified of technology, and above all the ancient devices of the Dwarves. Halflings will be uneasy around the technology of humans, tend not to like working with even the simplest of tools (would much rather get an animal friend to do a task for them). You will tend not to find Halflings as mill-workers, or smiths, or even carpenters; those that do are Halfling daredevils, revelling in the exhilaration and terror of the machines.

Halflings worship nature, and hope when they die to be forgotten, brought back inot the folds of nature and unconsciousness. Halflings brought into the fold amongst humans will follow in the imposed worship of the Church, but there are no real devotees, no Halfling martyrs or Saints. Those Halflings who are within the Church tend to be efficient bureaucrats rather than ecstatic preachers, or devoted ascetes. For all their seeming atheism (or so the Church has called it when they have previously purged and Crusaded against Halflings), they do believe in at least one supernatural entity, a dark presence that terrifies them. Although it is not mentioned amongst them, nor to any outsiders, but they all know the terror they feel has a name... The God of the Machine: Armok. 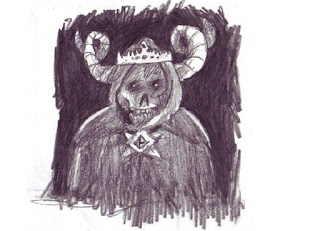 Rules Malarky
Special Abilities:
At One With NatureHalflings are most at peace in the woods and natural places. They have a 3 in 6 Bushcraft skill at first level.

Small, Sneaky and AfraidHalflings are dextrous and careful and good at staying out of danger. They begin with a 5 in 6 in Stealth in the wilderness or in confined spaces. They gain a +1 bonus to your DEX modifier and add a bonus +1 AC when you are not surprised. They’re small and so cannot wield large weapons and treat medium weapons as two-handed. Halfling unarmed strikes only do d2-1 damage.

Dangerous Devices
If a Halfling ever comes within 20' of a Dwarven Abutubarû Device they must make a save against Law. Upon failure, they have become linked to the Device, slaved to its will. The Halfling is now compelled to act in accordance with the Device's directive and must attempt to fulfil its centuries old task. F the Halfling is removed from communication range, they regain their own will. However they may not communicate this fact, and must do all in their power to prevent it, as the primary directive of every device is to prevent disconnection. If they are under the effects of mind-altering substances, they are assumed to have a +5 bonus to the save. A Critical Success on this roll means that the Halfling has connected to the Device, and it is now slaved to them.

Beastmastery
Starting at 2nd level Halflings gain the ability to dominate creatures and bring it under their control. They may attempt to dominate any animal of hit dice equal to their level -1. At any time they may control their level worth of hit dice in animals. Trying to dominate a new creature beyond this releases their hold on a random animal under their control.
A Domination attempt take one whole round (declare before initiative) and requires the Halfling to touch the creature or look deep into its eyes. All creatures can feel the violating touch on their psyche during domination attempts, failing a domination roll may fill unintelligent beasts with madness and fear and drive intelligent creatures to kill the Halfling before they lose their free will.
Domination is an opposed check of the Halfling's Charisma bonus plus level against the target’s Wisdom modifier plus level. If the Halfling is under the influence of mind-altering substances, they are assumed to have a +2 bonus, and additionally will not automatically madden an unintelligent creature, unless the check is failed by a margin of 5 or more.
Creatures might attempt to break free of this control (save vs Law) if they are treated badly, or forced to do something drastically against their will. If they successfully resist twice in a row they break free and may turn on their former master.

Drug Culture
Halflings only suffer half the psychoactive effects of any substance (rounded down)
Posted by Timmy TrashPanda at 5:23 AM

Other Blogs What I Done Read